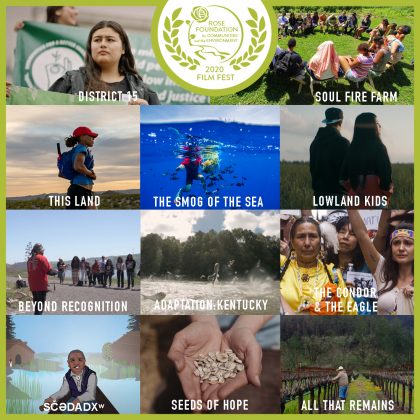 Our virtual 2020 Film Fest brought films from the grassroots to your home screen! Our fantastic film lineup shared stories celebrating the power of grassroots activism and community resilience. These beautiful films brought a feeling of connection and community, at a time when we were more physically isolated than ever.

Our film lineup was curated into three Themed Film Segments: “Youth Forward,” “Reclaiming Our Future,” & “Our Communities, Our Environment.” Read about the films in each segment below.

Do you have any great film recommendations for our next Film Fest?
We are always looking for fantastic films that speak to our values of Fostering Stewardship, Building Community, and Demanding Justice, and highlight community resilience. Know of a film that’s a great fit? Send us an email with a short description and a link to the film. 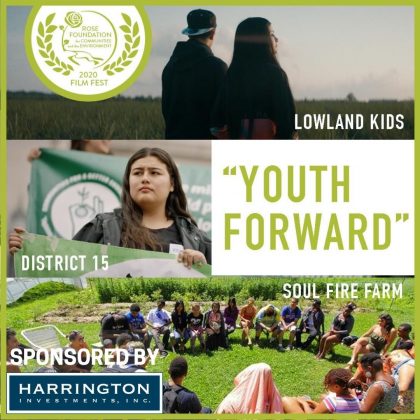 Around the world, youth are leading the movement for a just, livable future and are making their voices heard! At a time when our country and the world are struggling to adequately address the ongoing global health crisis, the climate crisis, and systemic racism and oppression, these inspiring youth and their leadership are as needed as ever. That’s why our 2020 Film Fest brought you “Youth Forward” films sharing the stories of young people’s essential role in grassroots activism and community resilience. 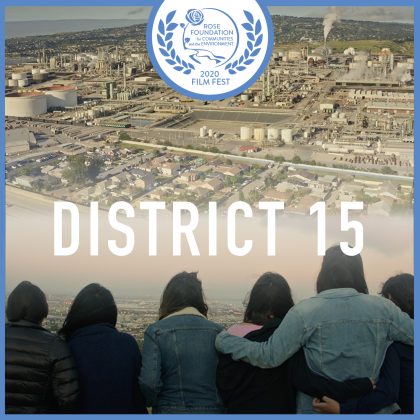 District 15 shares the story and uplifts the efforts of Communities for a Better Environment (CBE)‘s youth activists in the Wilmington neighborhood of Los Angeles. The Wilmington district has the largest concentration of oil wells and some of the highest rates of air pollution. This documentary follows these young people as they work to hold their local government, the Los Angeles City Council, accountable for protecting their community’s air, water, and health by prohibiting oil and gas drilling operations near homes, schools, and hospitals. Communities for a Better Environment (CBE) work with longtime Rose Foundation partner, to fight for environmental justice, stand up to the fossil fuel industry, and build a just, livable future!

District 15 is not just a documentary. This is a call to action. A call for you to get involved politically; to support frontline environmental justice communities; to end oil drilling; and to support Wilmington’s frontline CBE youth who live with oil wells in their backyard in their fight for a just transition. The Wilmington youth ask that you pause at the end of the film and take action for a 2500 ft health & safety zone and an end to neighborhood oil drilling. 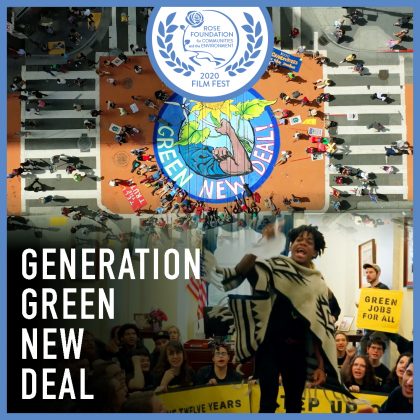 Generation Green New Deal is a film about the historic youth-led movement to stop the climate crisis, address economic inequality, and transform our country amidst fierce opposition. The film is created by a diverse team of award-winning filmmakers & storytellers with unparalleled behind-the-scenes access to the driving forces behind the greatest political movement in a generation. This is a documentary that digs deep into the civic movement in support of a Green New Deal – a proposed package of sweeping social and economic reforms that aims to tackle climate change and economic inequality in one fell swoop. Check out this exciting sneak-peek of the full feature-length documentary film coming out in 2021. 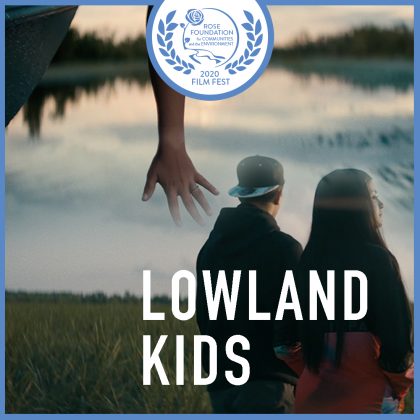 Lowland Kids tells the story of Howard and Juliette Brunet, the last teenagers on Isle de Jean Charles, a sinking island on the coast of Louisiana. For the two siblings, this place has always been home. After losing their parents, their uncle has raised them on this island, passing on his love and appreciation for the land. But the island is running out of time. Due to rising sea levels and hurricanes, the Brunet family finds themselves forced to leave Isle de Jean Charles to become climate refugees, and saying goodbye is not easy. The future can’t possibly be brighter than the life they have here. Or could it? 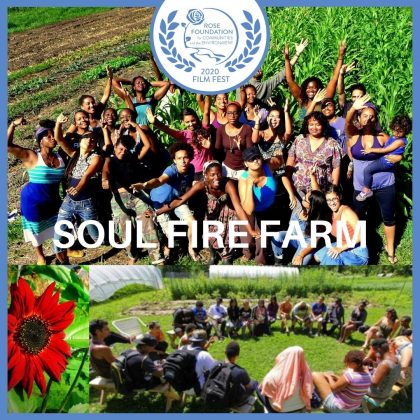 Soul Fire Farm is a BIPOC-centered community farm in upstate New York that is committed to ending racism and injustice in the food system through sustainable agriculture. The film documents this farm’s methods of addressing food apartheid and community health and well-being locally and takes us on a visit with students in a local community college as they learn more about environmental justice, food sovereignty, and community self-determination.
This powerful film of resilience and healing was featured in our Live Event on September 12th!

Sponsored by Community Bank of the Bay 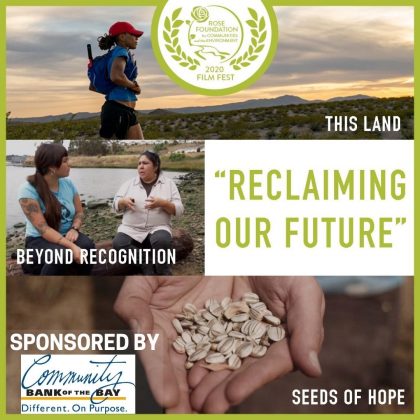 We are facing ongoing crises, including racism, the climate crisis, and deep threats to nature. And people are finding creative, innovative, and just solutions at the grassroots! Grassroots leaders are coming together to envision a just, livable world for all people. They are finding ways to reclaim public and ancestral lands and reimagine our shared future. Our 2020 Film Fest featured just a few of the many stories of these efforts through our “Reclaiming Our Future” films! 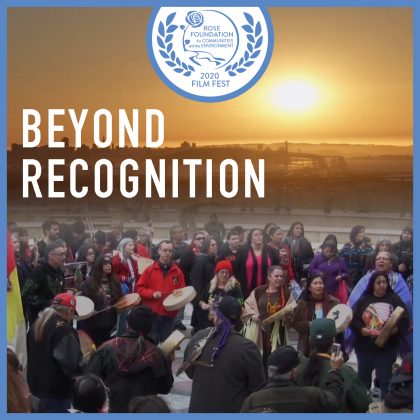 After decades struggling to protect her ancestors’ burial places, now engulfed by San Francisco’s sprawl, a Native woman from the non-federally recognized Ohlone tribe and her allies occupy a sacred site to prevent its desecration. When this life-altering event fails to stop the development, they vow to follow a new path to establish Sogorea Te Land Trust, the first women-led urban Indigenous land trust. Beyond Recognition explores the quest to preserve one’s culture and homeland in a society bent on erasing them and invites viewers to examine their own relationship to place, revealing histories that have been buried by shifting landscapes.

The film features Sogorea Te Land Trust, an Oakland-based organization that we proudly fiscally sponsored as the group awaited their nonprofit status. This spring, Sogorea Te officially became an independent 501(c)3! Many congrats to the Land Trust! 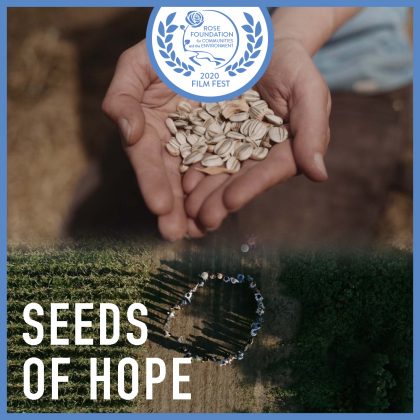 Seeds of Hope tells the story of a collaborative initiative in upstate New York that is growing the past to save the future. From planting to harvest, follow the St. Regis Mohawk Tribe at Akwesasne, the Hudson Valley Farm Hub, and Seedshed as they honor Native American heirloom seeds that are at risk of disappearing. Together, they plant traditional and sacred seeds and take care of them throughout the season to protect, honor, and return them to the tribe. Planting these last remaining seeds is a big risk, but one that is worth taking! Can they preserve their rich agricultural heritage and the stories that each seed holds? 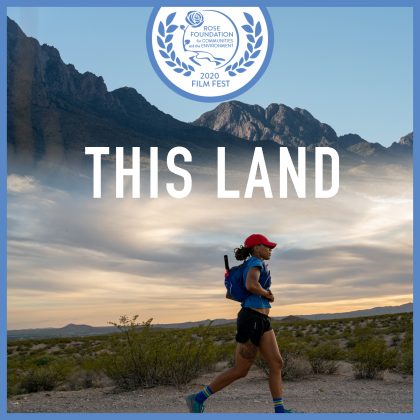 This Land introduces us to runner and advocate Faith E. Briggs, who used to run through the streets of Brooklyn every morning. Now, she’s planning to run 150 miles through three U.S. National Monuments that lay in the thick of the controversy around public lands. Along the journey, Faith is accompanied by running companions who bring diverse perspectives to the conversation about what it means to be a public land owner. The film tells a story about public land access, inclusion, and empowerment.

This important film and its beautiful cinematography was featured at our Live Event on September 12th! Enjoy a very special New Voices‘ Q&A with producer and subject of the film, Faith E. Briggs here.

“Our Communities, Our Environment” 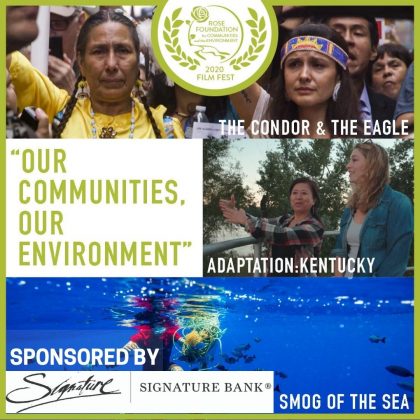 Earth. Water. Air. Fire. At the Rose Foundation for Communities and the Environment, we know our communities and environments are deeply connected and our fates are intertwined. Whether facing the impacts of fossil fuel pollution, plastics, invasive species, or extreme climate events, our communities’ and our environments’ health and wellbeing are suffering. And people are finding ways to gather data, find solutions, grow resilience, and share their stories. Our 2020 Film Fest screened “Our Communities, Our Environment” films, bringing these important connections to your small screen at home. 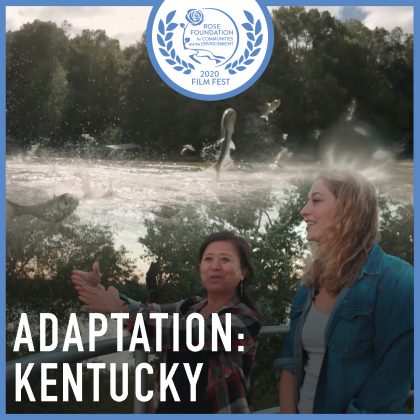 Despite persistent environmental change, people around the world experiment with innovative ways to find the path to resiliency. In ADAPTATION: Kentucky, scientist and National Geographic Explorer Alizé Carrère heads to a small town and meets Angie Yu, a Chinese-American woman who is finding environmental and economic solutions to the overpopulation of invasive carp in the Mississippi River.

This fun film showcasing Angie’s creativity was screened at our Live Event on September 12th! 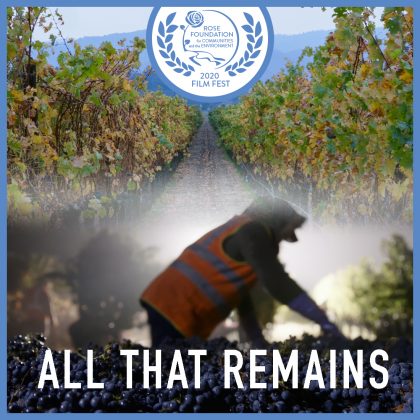 A year after deadly wildfires ravaged Northern California’s Wine Country, its vulnerable population of farmworkers, many of them undocumented, find themselves in a heightened state of insecurity and inequality. All That Remains is a portrait of the second responders and vineyard workers who are still dealing with the aftermath of the fires, long after the media has turned away. As California’s 2020 fire season continues to blaze through the state, understanding the unequal burden of the impacts of the climate crisis, these fires, and the heavy smoke on the state’s communities and local environment is as important as ever. 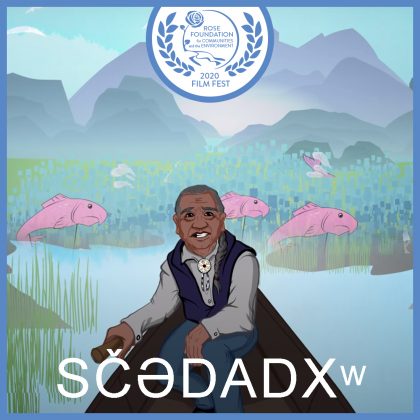 sčədadxʷ (salmon) is an animated short film featuring Indigenous and environmental leader Billy Frank Jr. The film takes viewers up the river through the eyes of the salmon, showing its pristine environment; its connection to the Pacific Northwest People; the arrival of the settlers; habitat degradation; and the unification of people throughout the world working together to save salmon and salmon habitat.

The Condor & The Eagle 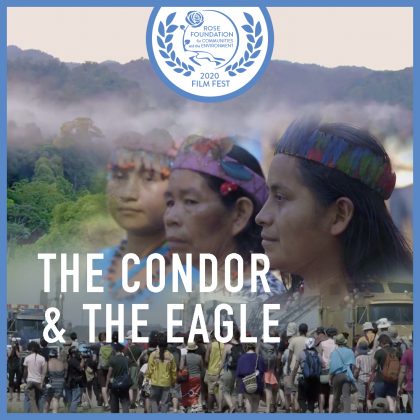 Four Indigenous leaders embark on an extraordinary trans-continental adventure, from the Canadian Boreal forests to deep into the heart of the Amazonian jungle, to unite the peoples of North and South America and deepen the meaning of “Climate Justice.” This journey is inspired by the ancient “The Eagle and The Condor” prophecy, which says that when the Eagle of North America and the Condor of South America unite, the spirit of peace will awaken on Earth. Indigenous knowledge keepers will come together with world leaders to define a path of healing for all humans and the planet – Mother Earth. The Condor & The Eagle offers a glimpse into a developing spiritual renaissance as four protagonists learn from each other’s long legacy of resistance to colonialism and its extractive fossil fuel economy. Their path through the jungle takes them on an unexpectedly challenging and liberating journey, which will forever change their attachment to the Earth and one another.

The Smog of the Sea 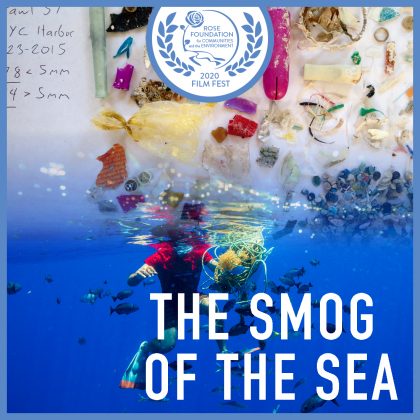 The Smog of the Sea chronicles a 1-week journey through the remote waters of the Sargasso Sea. Marine scientist Marcus Eriksen invited onboard an unusual crew to help him study the sea: renowned surfers Keith & Dan Malloy, musician Jack Johnson, spearfisher woman Kimi Werner, and bodysurfer Mark Cunningham become community scientists on a mission to assess the fate of plastics in the world’s oceans. On the way, the crew is stunned to witness the fog of microplastics permeating the world’s oceans. The Smog of the Sea provides a new perspective on the once pristine oceans, and makes an artful call to action for rethinking the scourge of the sea — single-use plastic.

This film features the work of our grantee The 5 Gyres Institute. We proudly support 5 Gyres’s work for water quality and plastic pollution mitigation through our California Watershed Protection Fund.

We can’t wait to celebrate with you next fall,