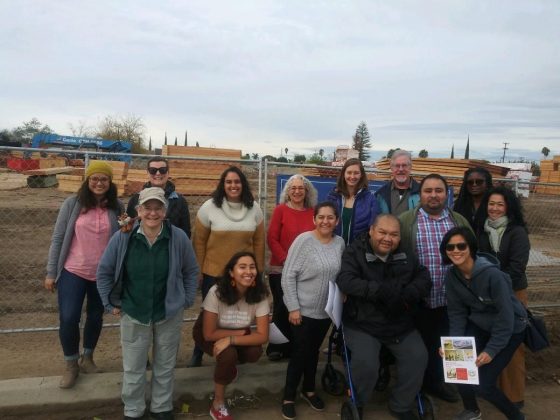 Rose staff had the opportunity to visit Comité Progreso de Lamont in 2020.

Tucked between the mountains and farmlands at the southern end of California’s Central Valley sits the unincorporated town of Lamont. In the United States, unincorporated areas do not have a municipal government. This means that residents are at the whims and mercy of the county’s jurisdiction. Without a local government, unincorporated towns like Lamont often lack basic public services and face greater challenges to receiving funding and resources for community improvements.

“They don’t have a local government or voice. That’s why CPL is so important for the community,” says Gustavo Aguirre, a GRF funding board member who has worked closely with the group. Augirre works at Center on Race, Poverty & the Environment (CRPE), a national environmental justice organization that provides legal, organizing, and technical assistance to grassroots groups in low-income communities and communities of color. He has dedicated over 16 years to movement building that supports grassroots groups like CPL. I had the opportunity to sit down with Aguirre to learn more about CPL’s wins for the community of Lamont. 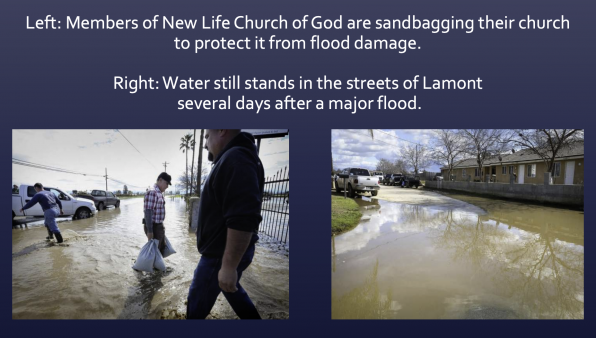 In the 1930’s, farmlands cropped up on the Caliente creek bed that rests outside of Lamont. The agriculture destabilized the region’s topsoil and eliminated natural root beds, inhibiting the natural ground water absorption process. To protect their vulnerable crops from mountain water runoff, the farmers created berms and diverted the water away. This man-made channelization within the Caliente creek bed increased the velocity of water entering nearby Lamont. Frequent and devastating floods have damaged community buildings like schools and churches, raised insurance premiums, and disincentivized community development. After years of research, advocacy, and collaboration with organizations and governments, CPL secured a $14 million Urban Flood Protection Grant to protect their community. The Caliente Creek Urban Flood Protection Project will “remove the agricultural development and associated berms, revert the property to a natural vegetated area, and prohibit future development that conflicts with floodplain standards.” Not only is the grant a win for the environment but also for the community of Lamont. Aguirre anticipates this funding will decrease flood insurance, boost community morale and attract new development. 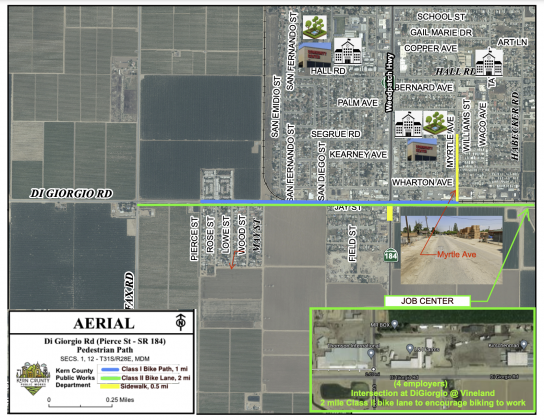 An arial photo of the proposed sidewalk and bike lane on Di Giorgio Rd.

In their second attempt applying for funds, amidst 480 other applicants, CPL attained a $6.5 million grant to improve Lamont Park. Underfunded and forgotten, the dilapidated park lacked needed amenities to attract community members. To create a plan that reflected the needs and wants of Lamont residents, CPL performed community outreach, elevating the voices of high schoolers, parents, and elders. “Getting the approval for this park is an incentive for the community to be more engaged” says Aguirre: “when they participate things can happen.” Community-level input, collaboration with other local organizations, and coordination with the county Parks and Recreation department helped CPL bring funding and pride back to the Lamont community park. “When you pave a sidewalk, you connect neighbors. When you pave a road, you connect a block. When you build a park, you connect a community.” – Timoteo Prado, Community Outreach Coordinator at CPL.

Aguirre made clear that these investments will have tremendous impact for the community of Lamont. The flooding plan, introduction of low-income housing, sidewalks and bike lanes, and newly renovated park are investments that will bear fruit for years to come. CPL is a case study of grass roots success. The organization serves as a voice for its community, persistently advocating and working in collaboration with other organizations and governments to achieve the resources, funding, and attention its community deserves.