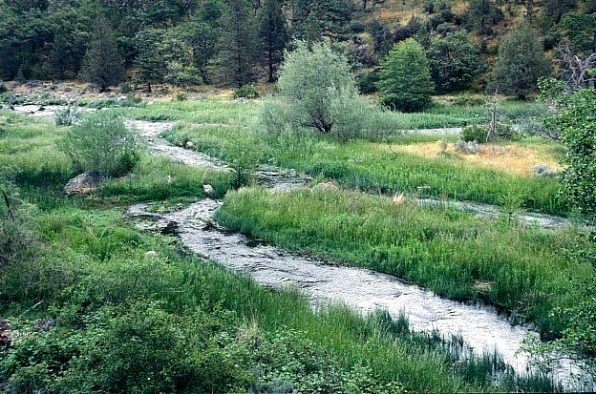 A stretch of the Shasta River titled “Salmon Heaven.”

The Shasta River Valley was once the most productive salmon tributary of the Klamath River. Fed by Mount Shasta’s ice-cold springs, its unique climate resistant and nutrient rich water historically supported vibrant salmon populations. These fish played a prominent role in traditional Tribal livelihoods and culture. However, excessive development and diversions, primarily by corporate ranchers, have gradually impaired water temperature and river flow. Coho salmon are among the fish species now facing the brink of extinction.

The Shasta River Safe Harbor Agreement was introduced by the National Oceanic and Atmospheric Administration (NOAA) to protect the threatened Coho salmon and provide ranchers immunity from being sued under the endangered species act. The Agreement took 8 years to complete and involved collaboration between federal and state governments, conservation groups, and ranchers. Eleven different private agricultural operators have volunteered to participate in the agreement, three of which belong to the largest landowner in California.

California Wildlands grantee Friends of Shasta River alongside other environmental advocates are threatening to file a lawsuit against the plan claiming, “It’s too much protection for ranchers and not enough [protection] for the fish.” The group of Siskiyou County residents formed in 2020 out of concern for the deteriorating Shasta River. They seek to improve the quantity and quality of water in the Shasta River so that salmon and other species can recover and thrive (shastariver.org). At the same time, the group recognizes the importance of ranches and farms to the economic vitality of Siskiyou County and advocates for a balance between their needs and the needs of the fish.

The key issue that opponents of the Shasta River Safe Harbor Agreement point out is that NOAA started at a distorted baseline. If ranchers reformed their stewardship practices as outlined in the program, the changes would not be sufficient to save the Coho salmon. Years of excessive irrigation have dewatered the river, driving down Coho numbers below the level needed to reproduce. Adding fuel to fire, the Safe Harbor Agreement is voluntary and ranchers can withdraw at any time while still receiving protection from the endangered species act for marginal operation improvements.

Friends of Shasta River believes NOAA should have worked with wildlife biologists to first determine what is an appropriate minimum instream flow and temperature to allow for aquatic species to survive and flourish. Only after mandating this baseline should NOAA have looked at Safe Harbor and other state and federal programs that could help the ranching community meet their obligations. For the last 15 years, the California Water Board has had a similar plan in place to improve conditions for the fish. During last year’s drought, the Water Board imposed its first-ever emergency curtailments that mandated a minimal water flow. The Water Board was excluded from Safe Harbor negotiations at the request of the ranchers, as the agency’s more stringent plan would have impacted their bottom line.

Opponents of Safe Harbor are hoping to negotiate with NOAA and others to modify the plan or develop a new one that begins with the fish and what they need to survive. Friends of the Shasta River exemplifies the environmental stewardship necessary to save our precious rivers and aquatic species.

This entry was posted in none.
Media Center
Donate
New Voices Are Rising
Grassroots Fund