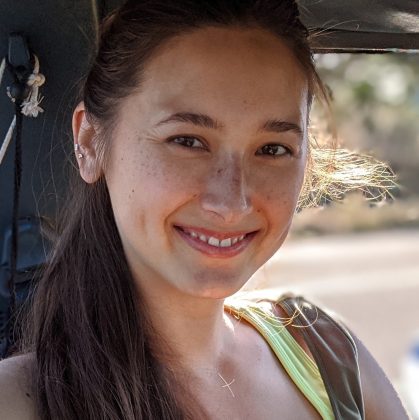 Every fall we host a Film Fest featuring a mix of short videos and feature films that celebrate the power of grassroots activism. Did you ever wonder where we find our films? Meet our Film Selection Intern Yenny Martin! Yenny Martin joined us last year and was instrumental in building our largest and most diverse catalogue of films yet! This year, Yenny is leading out entire film selection process and her weekly “sneak previews” where she shows us clips and trailers of possible films has become an ongoing Friday highlight. I had the opportunity to talk with Yenny about her film selection process, how the work connects to her graduate program, what she enjoys most about documentary filmmaking, and so much more!

This is your second year sourcing and selecting films for the annual Film Fest. How do you find them? When you pick films for the Rose Foundation, what are you looking for?

When I’m selecting films, I’m looking for some component of environmental justice. I’m looking for uplifting stories that involve some degree of grassroots action and resilience. And then, stories that are inspiring and that people can connect with on an emotional level. Stories that will prompt people to want to take action in some way or where there are actionable steps. Because of the structure of the films there’s not always a way for them to engage with the environment directly about next steps but at least we’re looking for a film that ends with some hope.

Do you have a favorite film from last year? Which one and why?

I have a lot of favorite films from last year. Some were more powerful because the main character was so magnetic. For example Catherine Flowers in The Accidental Environmentalist. I also really loved Big River because it’s made in such a quirky and humorous way that it doesn’t make these really overwhelming issues of climate change feel so bleak and depressing. It makes it much more accessible.

You are currently working towards a masters in Art Education and Community Practice at NYU. How does your degree connect with this work?

There’s the program and what I’m focusing on. And what I am focusing on is how to communicate environmental issues using visual art and creative communication and also how to educate the public through imagery. I think it relates really well to the Film Fest in that a lot of these films are good and interesting examples of how to communicate these issues. The Film Fest is very niche, but the breadth of films that can be within this niche covers so many different ways to approach storytelling and communication of these overwhelming issues. I think in total, when you look at all these films together, and the full lineup from last year and previous years, it’s cool to learn from these examples of how to reach people and to know that there are different ways of reaching people and that whatever your style is and whatever your interest is, there’s a need for that.

What makes a good documentary-style film? Have you ever thought about making a documentary? What would it be?

From my perspective, I really like documentaries that are participatory. So the filmmaker has a relationship with the subject matter, and there’s some communication between what’s in front of the camera and what’s behind the camera. I think it’s really interesting to see the filmmaker’s journey because it becomes more relatable and more intimate. This applies to this great film I recently saw, My Octopus Teacher – it’s a participatory film. I normally like films that are more Cinéma vérité, which is kind of like a fly on the wall, very natural observing style of documentaries. There’s no sit-down interviews, it’s kind of a non-conforming style with no talking heads. I love that style but My Octopus Teacher goes back and forth between incorporating interviews that are kind of the sit-down traditional talking head and these incredibly intimate explorations with this animal below the water, and these narrations of his thoughts on top of what’s playing out before you. It’s almost like listening to a journal entry, and you just feel so connected to the story and the relationship. Focusing on one subject and one relationship play out over time is really effective. Especially when it comes to something abstract that’s hard to identify with, like an octopus that lives on its own, it’s not a social creature and you can’t even begin to try to relate to it from a human’s perspective, so you relate to it through this mans perspective as the octopuses friend instead.

I started a documentary years ago on the pangolin, which people may recognize because of the pandemic. In 2017 I went to South East Asia and was working on a pangolin conservation documentary to spread awareness about wildlife trafficking of the pangolin and how people can help out. That’s on the backburner and the documentary I would dive back into. If I were to start a new one now, it would be about either animal sanctuaries or food waste. I would really like to follow some of the organizations I used to work at in Boston because they’re incredible organizations and tell the story of where the food comes from and where the food goes and why it’s important to reduce food waste.

What have you learned or most enjoyed in this position?

One thing I’ve learned is that there are alot of environmental films being produced which is something that I didn’t for some reason expect to see but it’s really exciting to know that there are so many filmmakers working in this arena. I don’t know if it’s a recent upsurge or trend. I’m learning that people seem very involved with this subject not only with environmental justice and public health, but also with different environmental subject matter whether that’s climate change or engaging with nature or stories about animals in the environment. There’s a lot being made.

I’ve most enjoyed working with Rose staff. And also communicating with filmmakers I would love for there to be an in-person component and actually meet people and celebrate their work in person. Because some of these films are just so extraordinary and I’d love to know more about people and their journey. So the people side of things.