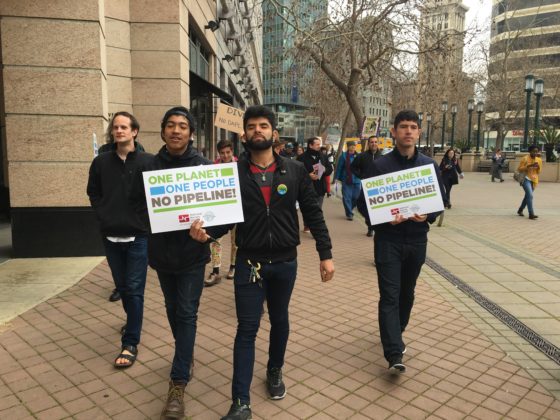 This Tuesday, March 7, our New Voices are Rising intern, Javier Meija-Cuenca (second from left), gave a speech at the No Coal in Oakland rally. He joined demonstrators flocking to Downtown Oakland to protest the Dakota Access Pipeline and  Phil Tagami’s lawsuit against the Oakland City Council’s 2016 ban on shipping and storing coal in the city. Tagami hopes to overturn Oakland’s ban on coal transports that prevented his company, Oakland Bulk Oversized Terminal, from building a terminal to ship Utah coal to Asia.

Javier’s speech fervently called on Tagami to drop his lawsuit against the city. Coal remains one of the dirtiest fuels out there. When burned, coal produces pollutants, that damage the human respiratory, cardiovascular and nervous system. Also, coal burning releases carbon dioxide, the main driver of climate change. Climate change will affect Oakland and coastal cities around the world.

Proponents of the terminal argue that it will bring more jobs to Oakland, but jobs can be made shipping materials without such a heavy carbon footprint. We believe that residents should be able to pursue livelihoods without having to depend on the use of harmful fossil fools like coal.