Saying Farewell and Thanks to Rose Board Member Nancy Berlin An Interview by Sage Bachman, Communications Assistant 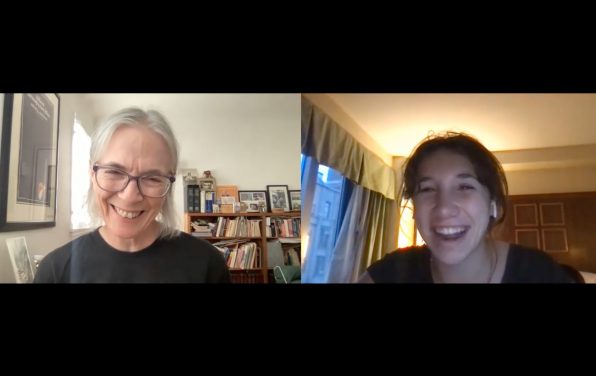 Nancy and I during our interview

Nancy Berlin served on the Rose Foundation board for 8 years, a time in which she was a constant source of sound advice, teamwork and positive direction. She has left a lasting impact on the board members she’s worked with, the grassroots organizations she’s advised, and the Rose Foundation as a whole. I had the opportunity to interview Nancy over Zoom and despite only meeting her briefly, can confidently say the board has big shoes to fill. Nancy’s unceasing compassion, and optimism during a time of contagious global pessimism, was refreshing to say the least. Read on to learn more about Nancy’s time at the Rose Foundation and beyond:

You have dedicated your time and energy to philanthropic and community advocacy work for decades. Why?

I think about my ancestors, the people that came before me, how much they struggled. All of my family in the last generation or two were immigrants to this country and they really struggled to find a way to survive and it wasn’t always easy. I feel like my life stands on their shoulders and I owe them a debt for what they’ve done and the many others who I don’t know, who aren’t part of my blood family, who have worked and struggled so hard to make this place better. We owe them a debt of gratitude and a responsibility to carry that work forward.

And then on the other side, it is all the people that come after us. My daughter and everyone’s daughters, sons, and children. We owe them a decent place to live and a certain amount of happiness and contentment. And I think that is what motivates me.

What inspired you to join the Rose Foundation board 8 years ago?

I first got involved with the Rose Foundation through Jill, working on helping young people get registered to vote. It is something I have always been passionate about – that voting is the way we get things done in this country – whether we like it or not. And when she told me what she was doing, I was fascinated with it. A lot of times we think of only certain kinds of groups doing voter registration work and here was Jill coming at it from a completely different perspective. Combining very basic grassroots organizing of young people with environmental justice work. I think that’s more common now, but was overlooked for a long time.

Did you have a specific role on the board, and/or were you on any special committees?

I’ve been on various committees! I have done a lot of work in helping nonprofits see their role in advocacy and organizing. I’ve always told people this about organizing: people are drawn to community organizing because of the excitement of it, being in the street and speaking up at rallies. But the thing is you have to do the other stuff too. A lot of it isn’t so much fun like putting together a spreadsheet of who all your activists are and tracking their emails, but you have to do it. You have to show that you’re responsible and accountable with your money and the work that you do. So I was happy to do the auditing. It wasn’t a big job because the Rose Foundation is very good at that sort of thing.

I most recently had been on a board committee looking at board expansion and issues around equity and inclusion. I was part of a small group that did strategic planning to help examine some of the issues around race and gender on the board so that we could carry that forward in the work that the Rose foundation does. Especially because a lot of the grassroots groups that Rose works with are very involved in those communities and come out of those communities and we wanted to make sure that the board was reflective of that and had the same kind of understanding.

In these 8 years serving on the Rose Foundation board, what have been your most memorable experiences?

One of the most exciting things about every board meeting was getting this enormous email package of grant recommendations and reading through them. It is a very hopeful thing to read through that package. Despite all the bad news of today, you go “look at all the people out there working to make this world better and to change it.” Even though it was overwhelming, it was filled with optimism and hope – that was probably my most favorite thing. And I really felt like it was a way that people don’t often think about how change happens. It often doesn’t happen in one big way but with one thing, on top of another, on top of another, and that’s how it happens.

We tend to think of the glamorous people and the celebrities but it’s change from the bottom up that really works over the long haul and you see that in those funding packages. And it’s fun to see groups grow over time and watch their winds.

What have been your favorite things about being a board member at Rose?

One of my favorite things was at a grassroots convening. I did a workshop there on nonprofit advocacy and what you can and can’t do. And the workshop was fun but the best part of it was seeing all those folks in the room and the range of organizations. And though they may have been small, had taken on big jobs and were very committed and energized to carry out their work. I consistently found that very exciting.

What do you plan to do next?

I’ve always been involved in a lot of different things, I’m a bit of a restless soul that way. I’ve been very active in the Poor People’s Campaign. The Poor People’s Campaign is a movement that is based on Martin Luther King’s Poor People’s Campaign that he had launched just before he was assassinated. And about 4 or 5 years ago people took up that idea again, saying that we didn’t accomplish what we set out to do and we still need to do that. This Poor People’s Campaign is a fusion movement combining the need to look at a series of interlocking injustices: poverty, systemic racism, ecological devastation, the war economy, and the distorted moral narrative of christian and religious nationalism, and so for me it’s really a continuation of what I’ve been doing my whole adult life. And it certainly carries on in a lot of the work that Rose does. For instance, we are working right now with the Apache stronghold and their fight to save their land at Oak Flat from resolution copper mining. And they are coming to California next week as part of an appeal they have at the 9th circuit court. So that’s a lot of what I’ve been doing.

I’ve also continued a longstanding 25 year commitment to Alexandria House which is a transitional shelter for women and children in Los Angeles and helping them to expand our services and hopefully our footprint. So part of it was to be able to have the time to focus on local things like that.

And the third thing is that my husband and I retired from our normal jobs just before the pandemic. We would like to travel, visit friends and family, and we are hoping that maybe this is the moment to get out.

What advice would you give to anyone thinking of joining a nonprofit’s board of directors?

I would advise anyone thinking of joining a nonprofit board of directors to look for something to do that’s outside of their normal range of experience. So if you get recruited to the board because you’re an accountant, attorney, or policy person – find something else to do in that organization that intrigues you because in the long run that’s what will keep you interested. If you just see it as part of the work you always do, it might just feel like work.

I remember the first time I got the packet and it was from the water fund and I realized I never really learned what a watershed is, I had somehow missed that! And I started pulling up all these maps and I think that really helped me to understand the work and feel that I’m not this one-dimensional person. You can bring whatever skills you have to the board but look at other things you could learn and try something new and broaden your horizon.

On a very personal level it led me to learn I live within walking distance from the Los Angeles river which most people don’t even know is there. There’s been a move to try to bring it back and quite a bit of that has happened during my years on the board at Rose and it’s been fascinating to watch and with a little bit more perspective of what that means and what that is. So for me, if you were recruited to the board for one thing, look for something else you don’t know about. If you’re the activist who knows all about the problem, dig into the finances because if you’re going to get involved in any of this type of organizing, it is all, important.

Thank you, Nancy, for your support of and advocacy for the grassroots, both as a Rose Foundation board member and an engaged citizen. We know you will continue to spark joy and passion in all your future endeavors!