From challenging fossil fuel infrastructure to taking a sledgehammer to pavement, our grantees in Tacoma, WA are working to build healthier and more just communities. Join Rose Foundation Program Officer Laura Fernandez on a trip through the area to meet Earth Ministry, and Washington Physicians for Social Responsibility:

The City of Tacoma, about an hour’s drive south of Seattle, WA, is a port city and a major shipping hub where goods moving along the Pacific Rim jump between barges, trains, and trucks. The shipping industry helps drive Washington’s economy, but also remains a major pollution source. The Rose Foundation’s Puget Sound Stewardship & Mitigation Fund invests in local communities that bear the brunt of pollution impacts. Clean Water Act settlements negotiated by Puget Soundkeeper Alliance (PSA) provide funds to support groups working to protect the watersheds that flow into the Sound. PSA helps pollution dischargers come into compliance with federal water, health, and safety laws, and holds them accountable to the public. So it seemed fitting that our visit to the Puget Sound brought us to the historic Tacoma Tideflats area to meet with grantees who are crafting a new vision for Tacoma vested in green infrastructure and clean energy.

Fossil fuel infrastructure including pipelines, refineries, and storage tanks release toxic pollution into the air and nearby bodies of water, in addition to the threat of leaks and explosions. During our visit with Earth Ministry and Washington Physicians for Social Responsibility (WPSR), we learned about their work to protect Tacoma’s historic Tideflats neighborhood (which includes the Port of Tacoma) from fossil fuel expansion. Both organizations work with non-traditional constituents, bringing people of faith and health professionals into the growing movement to oppose dirty energy projects in the area. Recently they’ve worked together to challenge the placement of a new liquefied natural gas plant. Earth Ministry is also helping religious communities consider water protection as a central tenet of their faith – a resource that is both essential for life and sacred from their religious perspective. For WPSR, the harmful impacts and major human health concerns associated with dirty infrastructure are their main reasons in confronting new and expanded industrial facilities.

Rose Foundation provided funding to these groups to foster water advocacy and civic engagement against fossil fuel projects that directly affect the health of Commencement Bay and all of Puget Sound. Such projects include the current Puget Sound Energy (PSE) LNG plant, designed to store 8 million gallons in liquefied gas, and has remained under construction 2016 between Hylebos Creek and Blair Waterway. 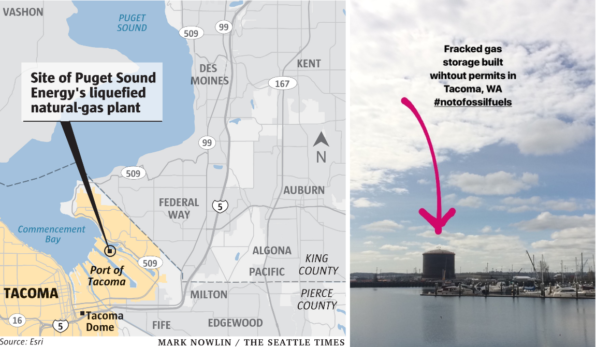 Puget Sound Energy plant as seen from the port

In May of 2017, the Tacoma City Council adopted a resolution that initiated the Tideflats subarea planning process, allowing for the establishment of a shared, long-term vision, and a more coordinated approach to development, environmental review, and strategic capital investment. The Council also determined the need for interim regulations to place a moratorium on new heavy industrial and fossil-fuel projects, until the lengthy subarea plan process comes to a conclusion. The Council’s decision scored a victory for climate activists and self-described Water Warriors that represent local and state groups and tribes, including our grantees and the Puyallup Tribe.

Developments such as the LNG facility require consultation with sovereign tribal nations, and the developers of the Puget Sound Energy LNG terminal failed to properly consult with the Puyallup Tribe. A federally recognized Tribe with sovereign treaty rights, the Tribe serves as a major employer in the Tideflats area in the center of their sovereign territory. Also, although the project lacks full environmental review and the moratorium forbids its construction, Puget Sound Energy is continuing construction of the plant. Beyond the legal issues and ecological threats, Laura Skelton from WPSR explained that health professionals are concerned because the new plant will pace local communities in a catastrophic risk “blast zone,” explaining that, “the plant is within a 2 mile reach of disadvantaged communities, schools, and tribal land.” The risks of fracked gas to human health, safety and the environment are listed in WPSR’s recent report, and include: 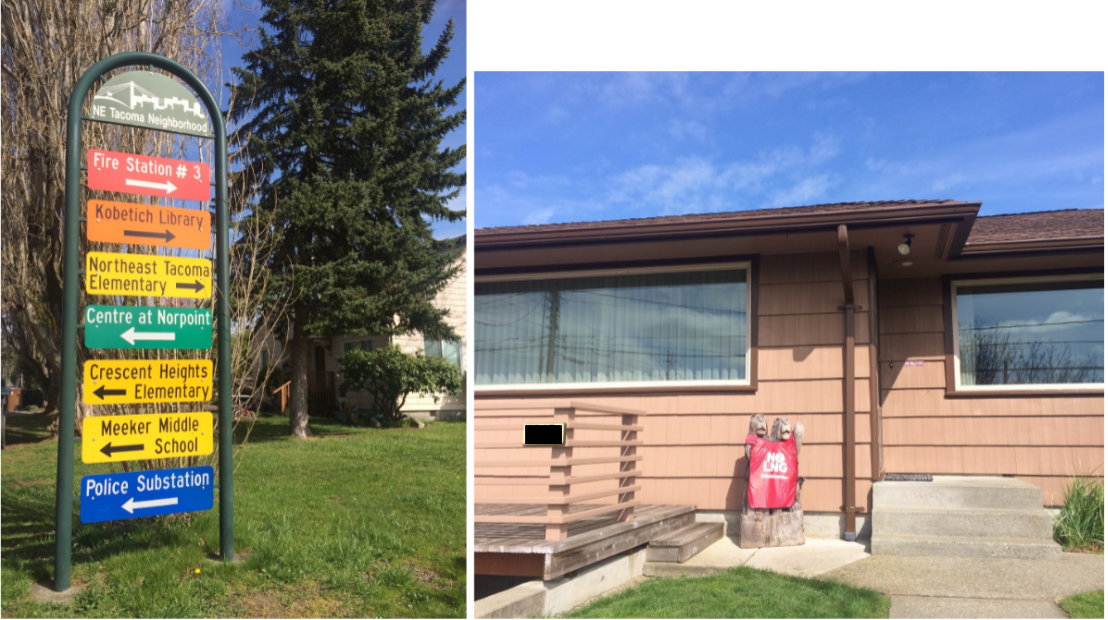 Rose Foundation also recently developed a more personal connection to the Tideflats. While they were completing their dual degree in Economic and Environmental Policy at University of Puget Sound, our new Grants Assistant, Miranda Kraus collaborated with a group of classmates to create a podcast specifically about the Tacoma LNG Facility. Miranda interviewed Puyallup Tribe Council Member David Bean and learned compelling background about tribal sovereignty, the risks of the LNG plant, and PSE’s lack of communication with the tribe in the decision-making process.

After learning about fossil fuel infrastructure, we got a taste of what the future could look like at Holy Rosary School in the Tacoma Mall neighborhood area where we saw the completion of the first phase of a 15,000 square-foot depave project led by the Pierce Conservation District through the Depave Puget Sound partnership program. Depave Puget Sound uses a community driven process to identify, redesign and remove unnecessary impervious pavement that contributes to water impairment and urban blight in Pierce County. By directly involving the community in in the removal and the placement of natural landscaping, the project intimately involves the community in reinventing the built environment. Pierce County residents’ also deepen their understanding of the effects of polluted rainwater on water quality and the benefit to urban green space. Rose Foundation funds enabled the completion of the first 5,000 square feet of the project. Click here to see how the project transformed the school.

The volunteer engagement piece of the project is the most powerful part of the Depave model. The school hosted a 3-day Depave event where 43 volunteers spent a total of 186 hours literally hauling pavement from the site into dumpsters to be recycled. During the event, many conversations sprouted up around water quality, polluted runoff, what happens to water after it goes down the drain, and how individuals and communities can make a difference. As we left the school, our thoughts turned to the possibilities — what if every school in Tacoma could depave? What would a city with entirely green infrastructure look like?  We’re proud to support local residents in taking a first step towards that vision.