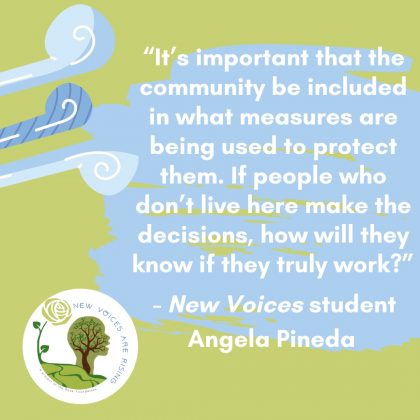 We’ve got some exciting news to share: this month the Bay Area Air Quality Management District (BAAQMD) recommended East Oakland be a designated priority community under AB617 to the California Air Resources Board.

Now, if you are wondering what in the world the above sentence means, you are not alone! Our New Voices Are Rising students have been deeply immersed in advocating for East Oakland to become a priority community, and their work gives us an opportunity to learn about AB617 and what this decision means for the East Oakland community.

East Oakland residents have suffered from air pollution and its consequent health impacts for decades. According to a 2016 report by the Alameda County Public Health Department, “East Oakland’s freight corridor, busy roadways, and industrial sector have contributed to elevated levels of air pollution, and residents experience some of the highest asthma hospitalization rates compared to the rest of the region.” (edf.org). And it is no coincidence that all this industrial activity has occurred within a majority low-income and people of color community.

AB617 is a California State Assembly Bill, signed into law in 2017, designed to promote more community participation in reducing the levels of and exposure to air pollution in order to improve public health. The bill tasks the California Air Resources Board (CARB) and local air districts to protect neighborhoods that are disproportionately impacted by air pollution. The local air districts recommend certain areas to be designated as “priority communities”, and then work with these communities to develop an air protection plan. Mobilized with funding and resources, the community participates in the process, and CARB approves and implements the plans.

While East Oakland has yet to be officially approved by CARB as an AB617 priority environmental justice community, backing from the local Air Quality District Management Board is a major step towards achieving this goal. This win was driven by multiple stakeholders in East Oakland, including Communities for a Better Environment and East Oakland Collective, and supported by other community groups like New Voices Are Rising and Local Clean Energy Alliance.

Our New Voices students have advocated for this designation over several years by writing letters and attending local meetings. [Read one of their recent letters here.] Many of our youth hail from East Oakland and other nearby communities that suffer from poor air quality. Witnessing and experiencing the adverse health effects of living with pollution has informed their fight. One of our students, Angela Pineda, prepared and delivered the following remarks at an August workshop with BAAQMD: “It’s important that the community be included in what measures are being used to protect them. If people who don’t live here make the decisions, how will they know if they truly work? That’s why we need people who live in East Oakland to make a plan to clean up our air.”

Congratulations to the New Voices team and to all the organizations and community members driving this change. Their work exemplifies the power of working collectively and advocating from the grassroots up.