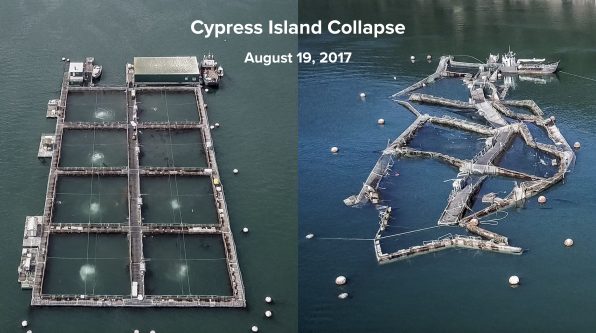 Aerial view showing side by side the Cypress Island net pen before (shown left)
and after (shown right) the 2017 collapse.
Photo credit: Wild Fish Conservancy

In 2017, Puget Sound’s Cypress Island experienced a catastrophic spill — not of oil, but of invasive fish. A salmon farming net-pen operation owned by Cooke Aquaculture collapsed (see above photo), releasing over 300,000 invasive Atlantic salmon infected with an exotic virus into the Sound. The release threatened the native salmon populations and compromised the primary food source of the region’s iconic and beleaguered Southern Resident Orcas (SROs). Washington-based nonprofit the Wild Fish Conservancy sued Cooke Aquaculture to hold the company accountable for these impacts. And in 2019, thanks to this legal action, the company agreed to place over $1 million into a mitigation fund with the Rose Foundation to support projects improving the water quality and aquatic habitat of Puget Sound. With this mitigation funding, in 2020 we launched our Orca Fund— a grant program designed to protect the only endangered population of orcas in the United States, and to improve the water quality they depend on. 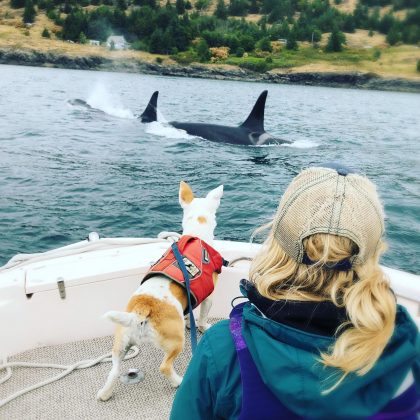 This winter, we completed our first grant cycle, awarding nearly $300,000 to 5 groups that are protecting the health of the Puget Sound for Southern Resident Orcas (SROs) and other native species. Two of our grantees are bringing together special volunteers to protect SRO populations: Kwiáht is engaging in community science to track bioaccumulation of toxins in the SRO foodweb, and the University of Washington’s Center for Conservation Biology is partnering with scat detection dogs who locate Orca fecal samples in open waters to analyze their reproductive and nutritional health. 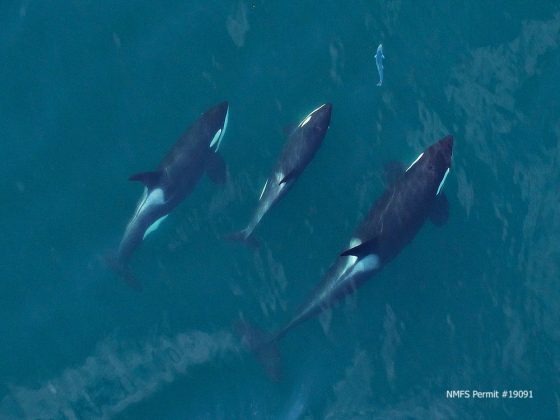 A couple of our other grantees are bringing photography into their conservation efforts: Marine Ecology and Telemetry Research is surveying the dolphins through photo-identification and sample collections, and SR3 (Sealife Response + Rehab + Research) is studying high-resolution aerial photos collected from drones to analyze SRO patterns, including life cycle, growth, and body condition. Bridging the gap between research and action, grantee Wild Orca is completing a full review of existing SRO research findings to create educational tools that bring this science to decision-makers, the community, and schools.

Healthy orcas need healthy water. We are so excited to fund these incredible projects that are improving the water quality of the Puget Sound for orcas and our communities! And we are looking forward to funding more impactful projects through our Orca Fund next winter.

(Did you notice above that we called the Southern Resident Orcas “dolphins”? Fun Fact: Orcas, also infamously known as killer whales, are biologically closer to dolphins than whales! They are the largest member of the dolphin family.)