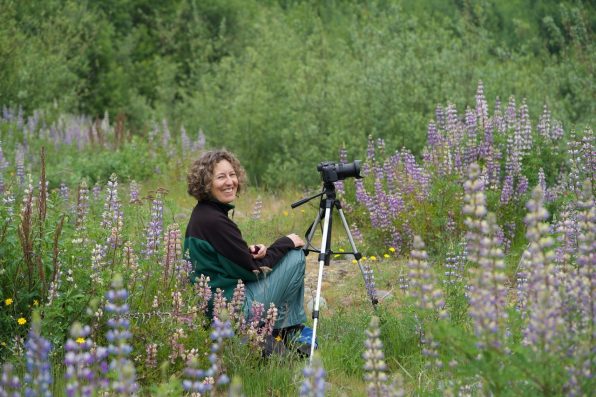 Jessica in the Elwha Valley which she visits annually since the removal of the dam.

This September marks the 10th anniversary of the largest dam removal in history: the Elwha River Restoration Project. We are proud to commemorate this moment at our 2021 Film Fest, by screening two documentaries: Return of the River and Think Like a Scientist: Renewal; that explore this historic project and its ecological and cultural significance. These two films as well as Midori Farm were created by the award-winning documentary filmmaker, Jessica Plumb. We are fortunate to have had the opportunity to interview Jessica for this month’s Meet the Rose Community feature.

I have been drawn to the power of story my whole life, and I love to explore the relationship between people and place. I took a circuitous route to documentary filmmaking, perhaps because media was not a big part of my early life on the coast of Maine. My storytelling work began with writing and photography, which led me to documentary filmmaking fifteen years ago. I love the myriad ways in which filmmaking challenges me creatively, and the process of storytelling with a team. All of my work begins with curiosity, and is rooted in my love of the natural world. I am drawn to stories of transformation that expand our sense of what is possible.

When did you first hear about the Elwha River Restoration Project, and what inspired you to create a documentary about it?

I live on the Olympic Peninsula, and I began following the controversy around the Elwha River with quiet passion, before dam removal commenced. That said, the seeds of my decade-long journey on the Elwha were planted earlier, on the other side of the world, on the Yangtze River in China. I spent my twenties teaching and writing in China, and I had the opportunity to travel the Yangtze shortly before the reservoir began to fill behind the giant Three Gorges Dam, still the largest dam on earth. That journey left me with images I will never forget, in particular the memory of red lines painted on buildings in every town along the river, showing the future inundation level. I can still picture towns bustling with life below those red lines, as though the water would never rise.

In fall 2011, I visited the Lower Elwha Dam site with my daughter’s elementary school, just as dam removal was getting underway on the Elwha River. We watched as the river began to roar through a notch in the lower dam, for the first time in a century, revealing land that had been inundated for a hundred years. That afternoon I committed myself to telling the river’s remarkable story. Three years later, in collaboration with Co-Director John Gussman, we released an independent feature documentary, Return of the River.

You followed up Return of the River with another documentary focused on the restoration of the Elwha River, Think Like a Scientist: Renewal. And we are fortunate to be screening both of these films at our 2021 Film Fest. For both of these films, you worked closely with various people connected to the Elwha. Have you since stayed in contact with any of these individuals? What are they doing now?

Absolutely. I’ve stayed in touch with many people associated with this story, which continues to develop. The feature film ended as the arc of the social and political story came to resolution, however the outcomes of ecological and cultural restoration were just starting to unfold. Lessons will be learned from the Elwha for many years to come, as the full impact of dam removal on the river is revealed. I’ve stayed in touch with many scientists, who continue to track the transformation of an entire ecosystem. The project is fortunate to have an exceptional circle of researchers, who’ve focused on collaboration and cross-disciplinary learning. Some of the scientists have taken their expertise to other rivers where dam removal is on the horizon; for example, Joshua Chenoweth, who oversaw the revegetation plan for both Elwha reservoirs, is now planning for revegetation on the Klamath River, when dam removal begins there.

We’ve also lost some characters from Return of the River over the past decade, I’m sad to say, in particular some of the elders profiled in the film. Adeline Smith, one of the last native speakers of the Klallam language, lived long enough to celebrate the Elwha River running free. She passed away in 2013.

This is a notable milestone in the ongoing restoration journey. From my perspective, the biggest celebration is happening in the river itself; the sound of splashing and slapping as the fall salmon run gets underway. Multiple salmon species are headed upstream as I write, migrating far beyond the former dam sites.

The pandemic has scaled back plans for a public celebration of the 10th anniversary, as the Delta Covid virus is surging in Clallam County at this time. Scientists are eager to take the pulse of the watershed at the ten-year mark, and are now planning to share data at a spring symposium.

On a personal level, I plan to visit the river with my family, as I do every September when salmon return. I’ve borne witness to an extraordinary transformation in the Elwha valley, and this annual ritual fills me with awe.

How can people get involved in supporting the removal of dams and the restoration of rivers?

This is a vital moment to engage in river restoration, as the fate and role of dams is under consideration all around the country. The Western United States faces converging crises around the loss of wild salmon, water shortages, and the impact of a changing climate on rivers. In the Pacific Northwest, one of the most pressing opportunities around dam removal involves four dams on the Snake River. These dams are contributing to the rapid decline of multiple salmon stocks in the Columbia River system, as well as species that depend on them, including endangered Southern Resident Killer Whales of the Salish Sea. In recent months, debate around the Snake River dams was given new momentum thanks to a proposal by Rep. Mike Simpson of Idaho, who proposes a future in which the Snake River dams are removed to foster salmon recovery, and their functions (power, transportation and irrigation) are fulfilled with other solutions.

The Affiliated Tribes of Northwest Indians (ATNI) have passed a resolution in unanimous support of dam removal on the Snake River, however political delegations in Washington and Oregon remain undecided on the path forward for the Snake. This is a critical moment for the larger Columbia River Basin system, which has suffered ecological and cultural losses as the watershed was developed for hydropower.

Don’t miss Jessica Plumb’s three features and the other exciting films in this year’s lineup! Be sure to get your tickets today: rosefdn2021filmfest.eventbrite.com/