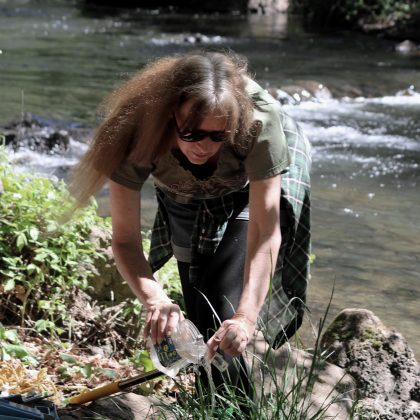 “Every living creature’s existence is dependent on having a place that keeps them alive.”
— Marily Woodhouse, Director of Battle Creek Alliance

Since launching nearly 15 years ago, Battle Creek Alliance (BCA) and its Director Marily Woodhouse have been fighting to protect the places that keep her community alive — the local forests and watersheds in the foothills of Mount Lassen. The Rose Foundation first got to know Marily and BCA in 2009, when the California Environmental Grassroots Fund awarded a grant to the newly-founded organization, supporting their advocacy for sustainable timber harvesting practices. Over the years, BCA has continued its important work to hold the State of California, Sierra Pacific Industries, and other large timber companies accountable to environmental laws that protect people and planet, and Rose has continued to support these tireless efforts through our watershed protection and grassroots funds.

One way Marily holds both industry and regulators accountable is by collecting irrefutable data. Marily launched a citizen science initiative with painstaking care and extreme scientific rigor that we began supporting through our California Watershed Protection Fund in 2012. Over the last decade, the initiative has collected over 14,000 water and habitat quality samples which document the environmental damage caused by industrial clearcut logging throughout the Battle Creek Watershed. BCA’s work goes far beyond the local watershed, as Marily points out,

“The problems in my homeland in the Battle Creek Watershed are not confined to just one area. Rather, they are a systemic failure of the publicly funded state regulatory agencies who have a close, collaborative relationship with extractive industries in every watershed.”

Last month on Earth Day, Marily took her data analysis to California Superior court. She and Battle Creek Alliance formally opened arguments for a sweeping public challenge of the State of California’s pattern and practice of routinely ignoring the requirements of the California Environmental Quality Act and the Forest Practice Act. The cumulative effect of ignoring these laws and allowing destructive clearcut logging to continue is a severely impacted watershed. In combination with the drought, these practices leave the watershed with an increased risk of wildfires, heavy erosion, and degraded native salmon habitat. We will keep you updated as the case unfolds.

Marily is playing a key role in reaffirming the need for our regulatory agencies to put people and planet first. For her dedication to protecting forests, watersheds, and wildlife that depend on our healthy ecosystems, we are proud to have awarded Marily with our 2021 Anthony Grassroots Prize, an annual award recognizing outstanding grassroots environmental activism. Find out more about the award and see great photos of Marily in action on our website.

WATCH: Marily produced Clearcut Nation, a film about the impacts of clearcutting in Northern California and how this practice alters our life-supporting watersheds.