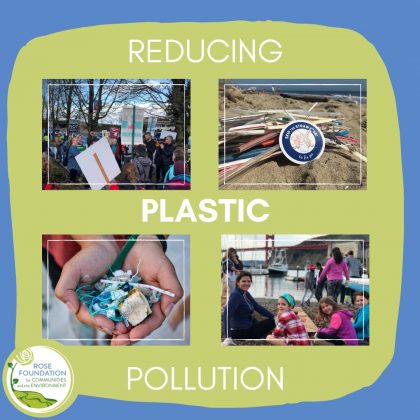 Plastic is everywhere! We’ve seen images of plastic in our oceans – from the Great Pacific Garbage Patch to sea turtles with straws in their nostrils. So, it should not be surprising that these petroleum-based materials — which make huge profits for the fossil fuel industry and release tons of emissions, as explained by this Mother Jones article —break down into microplastics and enter our drinking water, food chain, and bodies. We don’t yet know the extent of microplastics’ harmful effects. A recent article from the Associate Press shared that researchers at a conference in Washington are developing the mathematical risk assessment for microplastic pollution. And the San Francisco Chronicle reported on a recent lawsuit was filed by Earth Island Institute to hold ten corporations accountable for “negligence, creating a public nuisance, breaching their warranties and failing to warn consumers about the dangers of plastics.”

Because there is no one answer to the proliferation of plastics, the Rose Foundation supports a mosaic of projects and actions to protect communities and the environment. Continue reading to learn more about some of Rose’s incredible grantees doing this work.

Our California Environmental Grassroots Fund supports grassroots groups working to address plastics in their communities. When Crystal Geyser Water Company decided to bring a bottling facility to Mt. Shasta—a community with “little power to demand oversight and mitigation of impacts”— the community got organized. The plant would deplete the local aquifer, manufacture more plastic pollution, and pollute the air and water with byproducts. So, community members formed We Advocate Thorough Environmental Review (WATER) to challenge the corporation, prevent its manufacturing of single-use plastics locally, and protect the sacred headwaters of Mt. Shasta. Grantee All One Ocean collects 200lbs of plastic at a dozen beach clean ups in the Bay Area each year. And its Ocean Warriors program empowers thousands of public school students with “tools to make environmentally sound behavioral changes.” Take the Grassroots Challenge to support these groups and more that are powering the movement!

Additionally, our California Watershed Protection Fund grantee Santa Barbara Channelkeeper, has passed plastic bag, Styrofoam take-out container, and plastic straw bans in their city! And grantee the 5 Gyres Institute has investigated impacts of plastic pollution for more than a decade. The Southern California group works locally, nationally, and globally—with the UN—to reduce dependence on single-use plastics; estimate the amount of plastic pollution in our oceans; and encourage diverse youth leaders in the movement.

In Washington, our Puget Sound Stewardship & Mitigation Fund partner Puget Soundkeeper is reducing single-use plastic use through legislation. The “Reusable Bag Act,” very popular among residents, will allow retailers to offer recycled paper bags or reusable plastic bags with an eight cent “pass-through” charge. It is important to note that folks enrolled in food assistance programs are exempt from this charge. The Act now has to pass in the state Senate. And Puget grantee Zero Waste Washington is tracking the types and sources of plastics that travel from freshwaters to the ocean, a gap identified by the EPA.

Now more than ever, communities are standing up for their health and the environment! So keep your eye out, as these issues continue showing up in your newsfeeds.