Our New Voices Are Rising program has stayed true to its beginnings — working with students to protect Oakland’s air quality. More recently, students have advocated for cleaner air through the state’s AB617 process. AB617 is a California State Assembly Bill, signed into law in 2017, designed to promote more community participation in reducing the levels of and exposure to air pollution in order to improve public health. The bill tasks the California Air Resources Board (CARB) and local air districts to protect neighborhoods that are disproportionately impacted by air pollution. The local air districts recommend certain areas to be designated as ‘priority communities,’ and then work with these communities to develop an air protection plan. CARB oversees this process, approving and implementing the plans.

In 2018, the first year of the AB617 process, CARB designated 10 priority communities out of hundreds of nominations. This includes two Bay Area communities – West Oakland and Richmond/San Pablo – that would work with Bay Area Air Quality Management District (BAAQMD). BAAQMD developed Steering Committees to direct the work in both of these areas, and nominated local residents, organizations, and other stakeholders to join the committees. New Voices Are Rising was asked to participate in the West Oakland Steering Committee, and New Voices Fellow Michelle is an active and enthusiastic participant! Margaret “Ms. Margaret” Gordon and Brian Beveridge, from long-time New Voices community partner and Rose grantee West Oakland Environmental Indicators Project (WOEIP), were also appointed to lead the committee, and meetings have been facilitated by various outside consultants, including Rose Board Member Marybelle Nzegwu Tobias.

The West Oakland Steering Committee set out with an ambitious goal to develop a long-term community air protection plan. Thanks in large part to WOEIP’s extensive data collection through their Community-Based Participatory Research projects spanning nearly twenty years, the Steering Committee was able to produce “Owning Our Air: The West Oakland Community Action Plan” in just over a year. This landmark plan focuses on reducing three categories of pollutants that have plagued West Oakland for decades: fine particulate matter (PM2.5), diesel particulate matter (diesel PM), and other toxic air contaminants (TACs). The Steering Committee formed over 90 strategies to address these pollutants, ranging from public health initiatives, to urban greening and tree planting projects, to enforcement of existing regulations. This plan became the first approved AB617 community air protection plan, passed by CARB on December 5, 2019. Now, the Steering Committee is shifting its work to the five-year implementation phase.

“The West Oakland Community Action Plan is a game changer for all communities similar to West Oakland in California. This is a new day of decision-making and planning that goes far beyond emission reductions. We no longer have to go knocking on doors, asking for participation and engagement from regulatory agencies. Also, the California legislature has signed off to [give] impacted and vulnerable communities [access to] resources to become healthier.”-Ms. Margaret Gordon, West Oakland Environmental Indicators Project 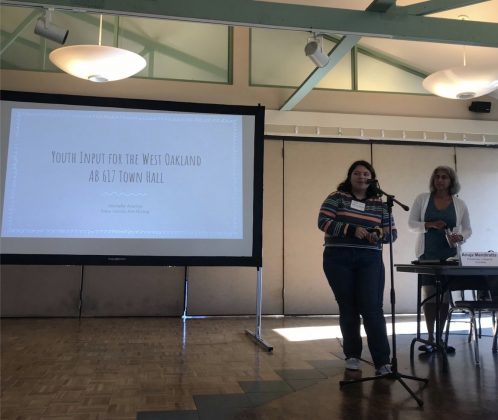 Although this new initiative partnering government agencies with the local communities to produce tangible and enforceable plans to improve air quality was largely successful in West Oakland, it did not come without its challenges. Reflecting on her experience as “the only young person” who attends West Oakland Steering Committee meetings, Michelle commented, “youth voices have not been sought nor excessively heard throughout the West Oakland AB617 process.” This concerns Michelle, who believes youth should be present and involved throughout the process, so they can “voice their opinions, because, ultimately, these decisions will affect them.” And as future leaders of their community, Michelle points out that these decisions affect the impacts youth “will soon inherit.” Michelle feels that while community members were present on the Steering Committee, “[West Oakland residents] who attend the meetings aren’t outspoken and don’t participate as much as everyone else,” and their concerns are therefore not heard. While an imperfect process, Michelle feels the recommendations the West Oakland Steering Committee presented to CARB through their West Oakland Community Action Plan were “heard,” well received, and “praised.” We hope Michelle’s presence and feedback continue to shape a more inclusive and effective implementation over the next five years.

The second round of the AB617 process took place in 2019; this phase was a new opportunity to add more priority communities to the process. From late October through December, New Voices and other community groups organized to add East Oakland, Bayview/Hunters Point, and Vallejo as designated priority communities. They gave public comment at several BAAQMD Board and Executive Meetings in the Bay Area, making their case for urgently addressing the pollution impacting these communities. New Voices Are Rising Program Assistant Mykela Patton explained that sharing public comments during this important decision-making phase “is the only way that our voices can be heard…. If we don’t go out of our way to speak up at these meetings, at these really intimidating, unwelcoming spaces, then our communities will continually be forgotten.” New Voices students reminded these regional and state agencies that East Oakland, in particular, faces extremely high levels of pollution from many sources, including industrial facilities like the AB&I Foundry; the crematorium; a heavy volume of freight trains; I-880 truck traffic to and from the Port of Oakland; and the Oakland airport. These sources compound, resulting in highly toxic air that East Oakland residents are breathing on a daily basis. These impacts are exemplified in East Oakland’s Havenscourt neighborhood, a community that is both exposed to more diesel pollution than 91% of the state and is in the 99th percentile for asthma in California. Mykela felt that BAAQMD was generally very receptive to their comments. She shared, “They really took that extra step to show us that they actually do really care about our thoughts.” BAAQMD staff offered support, resources, and future meetings to improve the staff’s relationship with the community.

Watch the video below to hear Anthony, Melanie, and Mykela provide public comment at a CARB meeting, advocating for East Oakland to be included in the AB617 process.

“East Oakland needs to be given the necessary support, so we can breathe without fear. This is important, because as we wait for this change, we are battling day by day to survive.”-Anthony, New Voices Fellow

On the other hand, New Voices Fellows felt a different response on their trip to Sacramento, where they spoke out at the CARB December Board Meeting. Coming back from her visit, Mykela felt “a little disheartened and hopeless, because community members – Black and brown people, some with language barriers, some unemployed, coming from so many different backgrounds – were explaining what it is like living their truth, living their everyday life to [Board members] that will probably never understand what it is like living with children with asthma, or living with children with respiratory issues, or living in communities that are always covered with dust, and soot, and toxic particles. And, at the end of the day, CARB and [BAAQMD] are bureaucratic agencies; they move incredibly slowly. And a lot of these [community members] don’t have any more time to wait. The [measures they are advocating for] should’ve happened already. There’s really no more time to wait.”

Watch the video below to see Mykela give her public comment at a BAAQMD meeting:

“It’s too often that I see the burden of communicating to the California legislature solely on communities of color, such as East and West Oakland. We need the help and support from the Air District, as we can no longer fight this fight alone….we still need action. There are actions that the Air District can take, without waiting for designation of East Oakland as a priority community.”-Mykela Patton, New Voices Program Assistant

Despite New Voices and many community groups efforts to advocate for East Oakland, Bayview/Hunters Point, and Vallejo, BAAQMD decided not to recommend any of these areas to CARB as priority communities in 2019. BAAQMD says this decision is simply a capacity issue: only $50 million has been allocated to support all of the AB617 priority communities across the state. They claim these funds and existing staff capacity are already straining to support the existing 10 priority communities. At the end of this stage of the process, CARB added only three new AB617 priority communities across California in 2019 – (find a map AB617 communities here). When it became clear BAAQMD would not be advocating for any new Bay Area priority communities, the objective of New Voices shifted. Program staff and students are now working to keep BAAQMD and CARB accountable to their responsibilities of protecting and advocating for our communities. Even though East Oakland is not yet designated as a priority community under AB617, BAAQMD should still prioritize the needs of this community: the agency should engage in the many other available regulatory methods to protect the community’s health and well-being and keep working to prepare the community for designation in 2020. These are measures that have been neglected for many years, and as Mykela shared, there is no more time to wait! 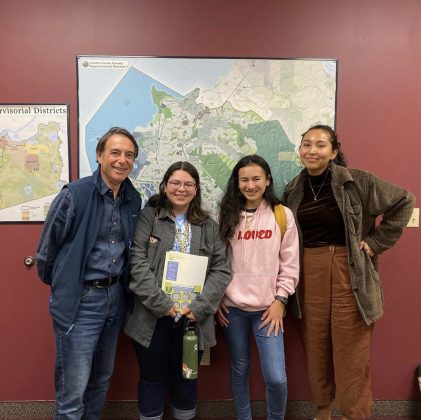 Fortunately, there is a large list of other regulatory actions BAAQMD can take to address air pollution in East Oakland that “should be speeded up and/or strengthened to better protect the community” outside of the AB617 process, as listed in a letter to BAAQMD — co-written by Jill Ratner, New Voices Program Director and following the years of work of Communities for a Better Environment. We need swift and meaningful action from BAAQMD now, and the agency already has the support it needs from community members to act. “We support the most aggressive action that BAAQMD and CARB can take. We don’t want them to be afraid to act. We want them to know” that when they act to address this injustice, “we have their back,” Jill shared. East Oakland’s air pollution is not a new problem, and it is not in limbo because it’s been left out of the AB617 process; this environmental injustice has been left to worsen over many years and has yet to be meaningfully addressed in any of the many other ways that are within BAAQMD’s jurisdiction. This has led Katherine to question, “Why are youth and people of color doing all the work to advocate for pollution reduction? We don’t need BAAQMD or CARB to save us. We are just asking that these agencies act to protect our communities. That’s what they were created to do.” We are not starting from scratch; there are many solutions, many community members organizing, and many plans that already exist for BAAQMD to utilize in addressing these issues. And as Katherine points out, many of the plans and strategies that came out of the West Oakland Steering Committee’s community air protection plan can be applied to improve much of East Oakland’s air quality.

After offering public comment at several BAAQMD and CARB meetings, there are budding partnerships on the horizon. Katherine shared that she feels these agencies are really hearing the urgency of this environmental injustice. BAAQMD staff and board have a renewed exposure to these problems and are starting to open the dialogue to critical conversations on how to make these processes more accessible. They have reached out to New Voices and other community groups to find out how the agency can better engage and include youth and community members throughout this AB617 process and beyond. And these conversations are making their way to the state level! The Rose Foundation recently found out that CARB has awarded a grant to New Voices in support of a project to build youth capacity working on AB617 in East Oakland and Richmond — and we see this as a testament that the agencies are listening, value youth voices, and are investing in youth and community input.